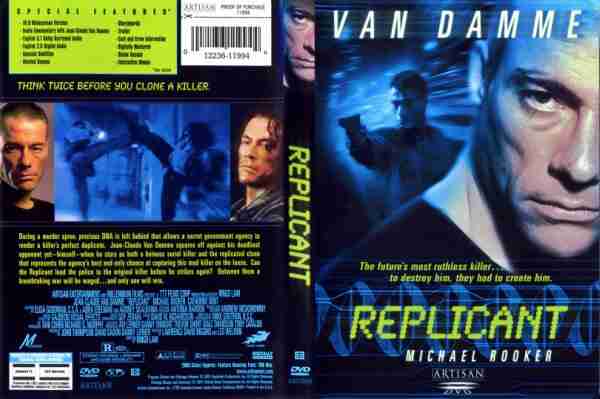 PLOT – Edward „The Torch” Garrotte (Jean-Claude Van Damme) is a serial killer who has a penchant for killing women and setting them on fire. All of his victims are also mothers. Detective Jake Riley (Michael Rooker) is a Seattle police detective who has spent three years chasing Garrotte. Just days before Jake’s retirement Garrotte strikes again, but Jake is off the case. During his retirement party, Jake receives a call from Garrotte, who threatens to go after his friends and family. Realizing Garrotte needs to be stopped no matter what, Riley sets out to stop him.

A secret government agency hires Jake as a consultant on a special project. They have cloned Garrotte from DNA evidence found at a crime scene. They need Jake’s help to train this replicant, who has genetic memories from Garrotte and a telepathic link to him. The replicant has the body of a 40 year old but the mind of a child. Jake’s job is to help the Replicant track Garrotte down by using the memories stored in Garrotte’s DNA.

The Replicant and Jake begin to hunt Garrotte. Jake believes the Replicant could turn on him at any time, as Garrotte’s killer instinct may take over. The Replicant tries to understand the world, and his connection with Garrotte. The replicant does not understand why Jake treats him so roughly, since the Replicant views Jake as family. Though Jake is abusive, the Replicant looks to him for protection and guidance as they close on Garrotte. Garrotte and the Replicant confront each other in a bar after Garrotte fails to kill Jake with a bomb. Garrotte kills a bartender, but lets the Replicant live. An origin story shows that Garrotte was abused by his mother, who then killed her unfaithful husband, and tried to burn their house down, which reveals why Garrotte hates women.

They confront each other later in a parking garage. Garrotte tries to convince his „brother” that Jake cannot be trusted. Frustrated that Garrotte got away, Jake asks why the Replicant let him go. The Replicant replies, „We are the same.” Jake tries to tell the Replicant that Garrote is a sociopath, but he refuses to listen. They find out Garrotte’s real name-Luc Sevard-and go to the hospital to talk with Sevard’s mother (Margaret Ryan), but she had already died of a heart attack. Garrotte arrives and beats Jake and also wants his „brother” to join him by killing Jake, but he refuses, forcing Garrote to try and execute both of them. Jake and the killer fight, leading to an ambulance chase in the parking garage. The van crashes into a toll booth, but the killer escapes. He hits Jake with a shovel and plans to burn him alive.

The Replicant and killer fight again in the hospital’s furnace room. The Replicant wants to kill Garrotte, but realizes that he is not the killer Garrotte is. The killer hits the Replicant with a shovel, which causes Jake to shoot him. The Replicant suddenly understands that Jake is his real family. An air conditioner, damaged in the fight, explodes, supposedly killing the Replicant after he gets Jake to safety. Upset by the death of his new „partner”, Jake decides to retire from his new job as a consultant.

Weeks later, Jake is with his wife Anne (Catherine Dent) and stepson Danny (Brandon James Olson). Jake spots a man in a raincoat put a package in their mailbox. However, Jake realizes the Replicant is alive when he finds the package contains a music box as a gift for Jake’s help. The Replicant is dating Hooker (Marnie Alton) as the film ends.