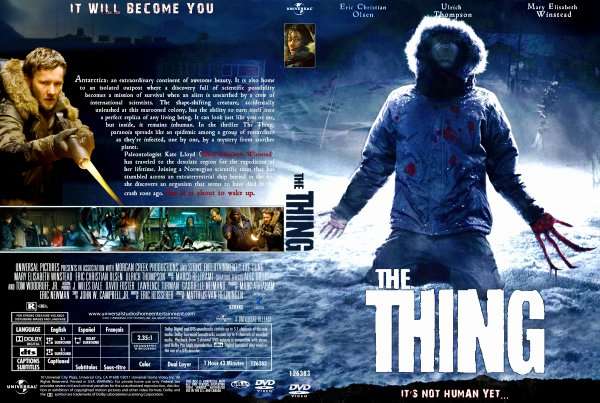 They travel to the Norwegian base, Thule Station, located in Antarctica near U.S. Outpost 31, in a helicopter manned by Carter (Joel Edgerton), Derek (Adewale Akinnuoye-Agbaje), and Griggs (Paul Braunstein). After viewing the spacecraft, Kate, Sander and Adam are told the group also discovered an alien body from the crash, buried in the ice nearby. In the afternoon the body is brought to the base in a block of ice.

That evening, while the team celebrates their find, Derek sees the alien burst from the ice and escape the building. The team searches for the creature and discovers that it killed Lars' dog. Olav and Henrik find the alien, which then grabs and engulfs Henrik. The rest of the group arrive and set fire to the creature, killing it. An autopsy of the scorched alien corpse reveals that its cells were consuming and imitating Henrik’s own.

Derek, Carter, Griggs and a sick Olav take the helicopter to seek help. Kate discovers bloody dental fillings near a blood-soaked shower. She runs outside to flag down the helicopter after it takes off. When it attempts to land, Griggs transforms into the Thing and attacks Olav, causing the helicopter to spin out of control and crash in the mountains. When Kate returns to the shower, she finds the blood is gone.

The team agrees to evacuate, but Kate confronts them with her theory that the Thing can imitate them and has likely already done so. They dismiss her claims, but Juliette says she saw Colin leaving the showers. Juliette and Kate look for the vehicle keys to prevent the others from leaving, when suddenly Juliette transforms and tries to attack Kate. As Kate flees, she runs past Karl, who is impaled by the creature instead. Lars arrives with a flamethrower and burns the Juliette-Thing, and then the already assimilated Karl.

By night Carter and Derek return to the base, but the team refuses to believe that they could have survived the crash. Kate has them isolated until a test can be prepared to verify they are human. Adam and Sander work on a test, but the lab is sabotaged by fire. Kate proposes another test, believing that the Thing cannot imitate inorganic material. She inspects everyone and singles out those without dental fillings: Sander, Edvard, Adam, and Colin.

Lars and Jonas go to retrieve Carter and Derek for testing, and discover they have broken out of isolation. As Lars searches near a building, he is suddenly pulled inside. The group hears Carter and Derek breaking into the building and rushes to intercept them. In the middle of a standoff, Edvard orders Peder to burn them. Peder takes aim, but Derek has a gun and shoots several times, killing Peder and rupturing the flamethrower’s fuel tank, which ignites seconds later. The explosion knocks Edvard unconscious.

When brought to the rec room, Edvard transforms, infecting Jonas and Derek before assimilating Adam. Kate torches the infected Jonas and Derek before she and Carter pursue the Thing. While the pair searches, Sander is also infected. After they separate, the Thing into which Edvard and Adam are fused corners Carter in the kitchen, but Kate burns it. Carter gets out of the way and the burning Thing jumps outside through the wall, they pursue it and she finishes it off. They see Sander drive off into the blizzard and pursue him in the remaining snowcat.

They arrive at the spacecraft. It suddenly activates, and its engines begin to melt the ice over it. While running Kate falls into the ship and is separated from Carter. Confronted by the creature, which briefly uses Sander’s face, Kate destroys it with a thermite grenade and the explosion deactivates the ship, shutting down its engines. Kate and Carter escape the ship and Carter suggests driving to a Soviet base about fifty miles away, saying that they’d stashed enough fuel in their snowcat to be just able to cover that distance.

As Kate and Carter return to their vehicle, Kate notices something strange. She accuses Carter of being a Thing because he is missing his earring. When she confronts him, Carter points to the wrong ear and Kate then burns him in the cabin of their vehicle, during which he screams like the Thing, proving Kate’s deduction correct. She then retreats to Sanders' snowcat and, facing her dire situation, stares out as the screen fades black.

As the final credits roll, helicopter pilot Matias arrives by morning at the now destroyed Norwegian outpost. He shouts, looking for someone. Colin is shown to have committed suicide in the radio room using a straight razor to slash both his arms and throat to ensure the Thing could never get to him. Matias sees the charred remains of the Adam/Edvard-Thing in the snow.

Lars, now revealed to be alive and uninfected, orders Matias at gunpoint to show his dental fillings to prove that he is human. The Thing, in the form of Lars' (deceased) dog, then runs out of the camp. Lars realizes it’s the Thing and orders Matias to start the helicopter. As the dog runs away from Thule Station, the two chase it in the Norwegian helicopter, with Mathias piloting and Lars leaning out of the open doorway, trying to shoot it with a scoped rifle. This leads directly to the opening events of the 1982 film.

« Replicant / Replikant
The Rise of the Krays »