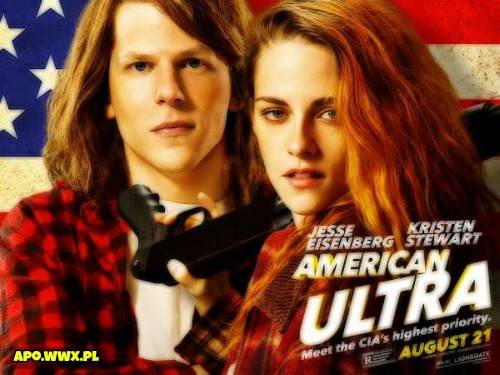 PLOT – Mike Howell (Jesse Eisenberg) is a stoner who lives in the sleepy town of Liman, West Virginia, where he works as a convenience store clerk, and is planning to propose to his longtime girlfriend, Phoebe Larson (Kristen Stewart), but constantly fails to find the right moment. He is psychologically unable to leave Liman, suffering inexplicable panic attackswhenever he tries, most recently when he planned to take Phoebe to Hawaii to propose. Meanwhile, in Langley, Virginia, CIA agent Victoria Lasseter (Connie Britton) learns that her unsuccessful Ultra program’s sole survivor is to be eliminated by her rival, Adrian Yates (Topher Grace). His Tough Guy project succeeded where hers failed, and he has ordered the death of the remaining Ultra asset, Mike, by deploying his Tough Guy agents. Feeling that she has a duty to protect Mike, who she says is just a human being trying to live his life, Lasseter travels to Liman and „activates” Mike through a series of code words. Because of his excessive drug use, Mike fails to understand their significance, and she leaves in resigned frustration.

Mike finds two of Yates' men planting a bomb in his car and is attacked, but his training allows him to quickly overpower and kill them. Horrified, he calls Phoebe, who reunites with him just as they’re arrested for the apparent murders. Yates sends two Tough Guy operatives, Laugher (Walton Goggins) and Crane (Monique Ganderton), to kill Mike and Phoebe at the police station, but they evade Laugher and kill Crane before escaping to the apartment of Mike’s drug dealing friend Rose (John Leguizamo), who agrees to hide them. Yates places the city under quarantine, and puts Lasseter and Mike’s pictures on the local news, claiming they have the very contagious disease „Super Typhoid” as a result of having intercourse with monkeys. Lasseter contacts her former assistant, Petey Douglas (Tony Hale), to send her a weapon that she can use to defend herself and Mike. Yates finds out and threatens Petey with charges of treason, which then causes him to cut Lasseter off from any further help. Yates then attacks Rose’s apartment with three agents using a lethal gas. The agents kill Rose and his two friends, while Phoebe steals a gas mask from one of Yates' men and rescues Mike, who had been exposed to the gas; Phoebe, familiar with the gas and how it works, reveals to Mike how to counteract the effects of the chemical. When pressed for answers on her knowledge of the CIA’s tactics, Phoebe begrudgingly reveals she’s an undercover agent assigned to be Mike’s handler, leaving him heartbroken.

Laugher ambushes the duo and captures Phoebe, while Mike is rescued by Lasseter and brought back to his house. He then learns that he volunteered for the Ultra Program due to his criminal record and later had his memories erased when the program was shut down. He also learns that Phoebe’s original mission was to get him settled in Liman and then leave, but chose to stay because she legitimately fell in love with him. Yates' men locate him, but Mike and Lasseter fight them off, prompting Yates to order a drone strike on the area. Petey refuses to follow his orders and secretly reports the situation to Yates' superior, Raymond Krueger (Bill Pullman). Mike contacts Yates and arranges to exchange himself for Phoebe at the convenience store, but, with Lasseter’s help, sets off a series of fireworks and dispatches of all of Yates' men before fighting and defeating Laugher, who is spared when Mike learns he is a mentally unbalanced man forcibly conscripted to Yates' Tough Guy program. Yates attempts to flee with Phoebe, but she escapes, while Yates is caught by Lasseter and nearly killed before Krueger intervenes and stops her.

Mike finds Phoebe and proposes to her before both are tasered by State Troopers/CIA, while Krueger leads Yates and Lasseter into the nearby woods and executes Yates. Lasseter convinces Krueger to spare her life and Mike’s by pointing out that, by taking out all of Yates' agents, he demonstrated he was both a valuable asset and that the Ultra program was actually successful. Six months later, Mike and Phoebe are in the Philippines, now agents on assignment under Lasseter and Petey’s command. Mike is willingly captured by Chinese mobsters, where his conditioning manifests and he begins selecting the available tools to eliminate the mobsters. The film ends in a cartoon sequence of Mike and Phoebe taking the mobsters out before ending up in Hawaii.