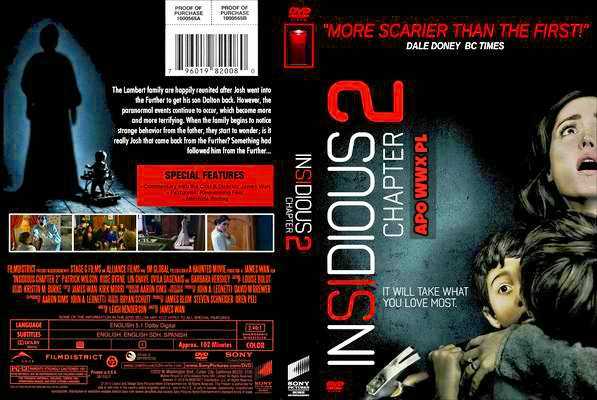 PLOT – In 1986, Carl calls his friend Elise Ranier to help discover what is haunting Lorraine Lambert’s son, Josh. After hypnotizing Josh, Elise attempts to find the location of Josh’s „friend”, an old woman who appears in photographs of him. She makes her way to his bedroom closet and is scratched on the arm. When they return to Josh, he stands up in a trance, and says, „I’ll show you,” before walking to a door and pointing at it as it opens on its own. Lorraine, Carl and Elise agree that making Josh forget his astral projection abilities is the best thing to do.

Twenty-five years later, Josh’s wife Renai is under questioning by a detective about the death of Elise as seen in the first film. He asks her about the person in the photograph taken by Elise moments before she died, and warns Renai that if Josh’s fingerprints match the fingerprints found at the scene, he will be in trouble.

Renai and her family relocate to Lorraine’s house, where Renai witnesses strange occurrences and suspects that Josh’s body is inhabited by the old woman. One night Renai follows the sounds of a piano, only to find a music box. After settling Cali in bed, the piano begins to play again, although no one is found at the piano. Cali begins to cry and Renai finds her outside of her crib. She confronts Josh about this, but he suggests letting it go so that they can try to live a normal life again.

Specs and Tucker visit Elise’s house and discovers the „Lambert, Josh 1986” videotape amongst her work collection. Upon reviewing the tape, they find someone standing behind Josh in the video. Lorraine visits the children’s bedroom where Dalton is sleep-talking, saying that someone is standing behind her. Lorraine eventually sees a woman in a white dress while looking in a mirror, but only finds Josh when she goes looking for her.

The next morning, Dalton tells Renai that he has been having bad dreams again, involving a woman in a white dress; as well as hearing Josh talk to an unseen figure in the hallway. While Josh takes the children to school, Renai receives a call from the police stating that the fingerprints do not match Josh. Her relief is disrupted by the presence of the woman in the white dress, who imitates Cali’s cries. Renai finds the woman and is knocked unconscious. Josh finds Renai unconscious and hears a voice urging him to kill his family in order to stay alive.

Lorraine visits Elise’s colleagues, Specs and Tucker, to seek an explanation behind the strange events. They show her the tape from 1986, enhanced to show adult Josh as the figure standing behind Josh. They contact Carl, who attempts to contact Elise using word-dice. Through the dice, they are told to find answers at the now abandoned „Our Lady of the Angels” hospital, where Lorraine used to work as doctor. The group visits the now abandoned hospital, and Carl sees things while entering a particular room. Lorraine recounts the story of a patient named Parker Crane who was admitted to the hospital, in that room, for trying to castrate himself. In a flashback, young Josh visits Parker in the hospital along with Lorraine, and is attacked by him. Some days later, Lorraine meets Parker in an elevator and apologizes for Josh and asks him to stay in his bed, but Parker doesn’t respond at all. Upon exiting the elevator, a nurse confirms with her that Parker died days earlier.

Lorraine and the group then go to Parker’s home where it is revealed that it was not Elise speaking through the dice, but Parker’s mother. They find a secret room with 15 corpses in it, a black wedding gown and newspaper clippings about a killer referred to as „The Bride in Black,” who kidnapped and murdered several people while dressed as a woman. Meanwhile, Josh’s body begins to slowly deteriorate and Renai gets further proof that Josh is possessed when he is unable to remember the song she wrote for him.

Lorraine insists that she, Renai, and the kids get away from Josh. Carl arrives to drug Josh, but Josh deduces that Carl knows he is possessed by Parker and attacks him. Specs and Tucker enter to help Carl but Josh incapacitates all three of them. Carl awakes in the spirit realm, where he meets the real Josh, and together they go into The Further to seek Elise. Josh enters his former house and travels to Cali’s room, where an evil spirit is approaching his infant daughter. He intervenes and struggles with the spirit but is overpowered. Elise appears and banishes the spirit from the house. It is revealed that these actions are what triggered the mysterious event in the first film; including the alarm going off and the front door opening by itself.

In the real world, Josh – possessed by Parker – ambushes Lorraine and Renai. He attempts to choke Renai but is knocked over the head by Dalton. Renai and the children escape to the basement. Dalton falls asleep and returns to The Further to rescue his father. In The Further, the real Josh, Carl, and Elise try to track Parker down by revisiting Josh in 1986. It is revealed that the adult Josh asked his younger self to find Parker, and the three of them enter the door that opened when he pointed at. In Parker’s house, the three witness Parker’s mother, Michelle – the woman in the white dress – abusing him for acting like a male or referring to himself using his birth name; ideally, Michelle wants him to be a girl named Marilyn. Parker had killed his female victims at the behest of his mother’s spirit, who also told him that killing Josh’s family would sustain his new body (because Josh’s body was rejecting his soul). Josh eventually finds the room filled with standing bodies – assumed to be Parker’s victims. Upon finding Michelle, the two engage in a fight. Elise saves Josh by knocking Michelle out, which interrupts the possessed Josh’s attempt to murder his family. Carl is informed by Elise that he is still alive; he and Josh make their escape, only to find Dalton, who leads them back to the living world. Renai is convinced that Josh has returned to his body when he mentions that he tried playing her song to get her attention – exactly what happened near the start of the film. Josh and Dalton voluntarily get their memories of their astral projection abilities erased through a hypnosis session, administered by Carl.

Some time later, Specs and Tucker proceed to a family’s house whose daughter, Allison, is in an unexplained coma. Unbeknownst to them – but noticed by the youngest daughter of the family – Elise’s spirit enters the home and approaches Allison. She hears a crackling sound (the same sound that signals the Red Faced Demon’s presence) and gasps as she sees something standing in the shadows.