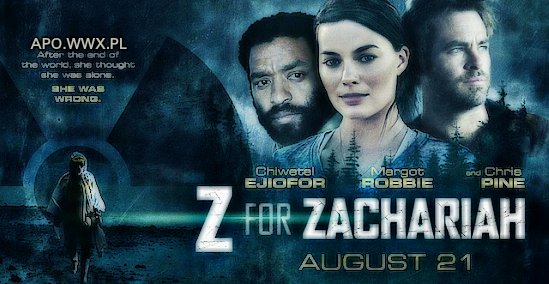 PLOT – After a nuclear holocaust wipes out the human race Ann Burden (Margot Robbie), a small town farm girl, is the only survivor because her farmstead is located in a small pocket that has not been contaminated. One day while out hunting rabbits she spots a small cart. Ann remains hidden while a man dressed in a radiation suit checks himself for radiation. When he finds none he shouts with joy and strips off his suit. Anne follows him to a small pool fed by a waterfall and tells him to get out of the water as it is fed by an outside stream and is thus radioactive. The man, John Loomis (Chiwetel Ejiofor), climbs out of the pool but almost immediately becomes sick. However he has medicine to counteract his sickness and Ann administers it to him and then takes him to her farmstead.

At her farm Ann learns that Loomis was a research engineer who was underground in a military bunker when the radiation happened. However he left the safety of the bunker in order to look for a place like Ann’s valley despite never really believing such a place existed. While showing him pictures of her family Ann tells Loomis that while her parents and younger brother survived the initial poisoning her parents went out looking for survivors believing it was their duty as Christians while her brother ran away to look after them months later.

As Loomis grows stronger he begins to take an interest in farming. He informs Ann that gas can be retrieved manually from the gas pumps at the local gas station so that they can once again use the tractor for planting. When Ann informs him that she has a broken generator he sets about trying to fix it only to discover that the engine burned out. Loomis realizes that the waterfall that feeds into the poison radioactive pool would be strong enough to use as an engine if only they were able to build a water wheel. He decides that they could build such a wheel using wood from the small church where Ann’s father was a preacher. Ann is upset at this as she believes that she and Loomis owe their survival to God. In order not to upset her Loomis abandons his water project idea.

Based on one of Loomis’s arguments that the water project was necessary in case of others, Ann realizes that she and Loomis will be responsible for repopulating the earth. After cooking him a chicken dinner and getting drunk Ann goes to Loomis’s room and takes off her clothes. However Loomis tells Ann that having sex will change everything between them and tells her that they need more time.

For a while Ann and Loomis continue to work together peacefully however strange things like all of their eggs going missing and Anne seeing a man while she is playing the organ in the church occur. This is later explained when Ann is going for a walk and meets Caleb (Chris Pine). While Ann is just as welcoming to him as she was of Loomis, Loomis is suspicious of him. Over dinner Caleb explains that he was able to survive by living in a mine but while he was there he saw two men kill each other with their bare hands. Loomis mentions that after leaving his bunker he met a young boy on the side of the road who attacked him and then begged Loomis to kill him after he saw that he had a gun. Ann is upset that Loomis never told her this. Loomis reveals that he did not tell Ann because he believed the boy was her brother.

Loomis takes Caleb on a tour around the farm where he reveals his idea for a water project but his desire not to build it for fear of upsetting Ann. Caleb brings this up over dinner, insisting that they should build the water wheel and Ann also agrees leaving Loomis baffled. The three set to work taking down the church for materials. While they are doing so Loomis observes that Ann and Caleb seem to be growing close. He awkwardly tells her that if she wants to be with Caleb he will not stand in her way.

As the construction of the water wheel nears completion the three survivors have a celebration where they get drunk and go swimming. On the walk home Loomis tells Ann he loves her. Ann goes to his room afterwards but finding him drunk goes to find Caleb and has sex with him in the washroom. In the morning, Loomis sees Caleb being affectionate with Ann and realizes what happened. He and Caleb go to complete the water wheel and Loomis tells Caleb that he told Anne to sleep with him in order to get him to stay. Caleb does not believe him.

Caleb manages to install the trough that feeds into the water wheel. On his way up the side of the waterfall he nearly slips and Loomis carefully brings him back up. However, after Loomis unhooks the pulley that he had been using to lift Caleb back up, Caleb slips again. Loomis struggles to bring him back up and then hesitates as the two men lock eyes.

Returning home alone, Loomis is confronted by Ann who apologizes for hurting his feelings. However, Loomis shrugs this off before informing Ann that Caleb decided to leave to try and see if there was a safe zone further south. Ann runs to the border of the farm to see if she can find Caleb but can see only trees.

Ann’s home has electricity once more. Going to the barn, she sees that her organ has been moved there. She plays and Loomis comes by her side and watches her.