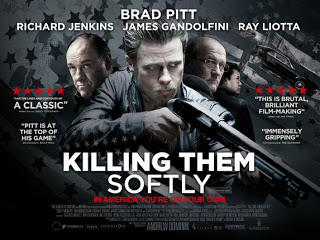 PLOT – In the fall of 2008, amidst both the American financial crisis and the presidential election campaign, a man named Johnny „Squirrel” Amato (Vincent Curatola) plans to rob an illegitimate poker game. He enlists Frankie (Scoot McNairy), a former business associate, and Russell (Ben Mendelsohn), a heroin addicted Australian expatriate who is stealing purebred dogs for money, to perform the robbery. Markie Trattman (Ray Liotta), the proprietor of a poker ring, is revealed to have previously orchestrated an inside job by paying two men to rob his own illegal poker room. He holds up under rough questioning by the hitman Dillon (Sam Shepard), though later he openly admits his involvement to various criminal figures and suffers no retaliation. Squirrel anticipates that the Mafia will automatically blame Markie for the heist.

Frankie and Russell, though obviously amateurs to the task, complete the holdup with no problems and leave with the money. However, Driver (Richard Jenkins), an emissary for the Mafia, discusses the recent robbery with an acquaintance of Dillon, a hitman named Jackie Cogan (Brad Pitt). Although Jackie understands Markie was uninvolved in the heist, he believes Markie should be murdered in order to restore the mobsters’ confidence in the local gambling scene.

Upon completing the crime, Russell travels to Florida to sell the dogs. While in Florida, he inadvertently informs a man named Kenny Gill (Slaine) of his involvement in the heist while trying to recruit him as a dealer. Kenny informs Jackie, who implicates Russell, Frankie, and Squirrel as the true perpetrators. All of this occurs during a backdrop of televised speeches given by then-President George W. Bush and then-Senator Barack Obama made during the 2008 US Presidential election.

Jackie carries out the hit on Markie himself, killing him in his car, but brings in another hitman, Mickey Fallon (James Gandolfini), who is on parole in New York, to kill Squirrel. Jackie explains to Driver how he prefers „killing them softly”—shooting his victims from a distance, without warning, giving them no opportunity to experience fear or despair—and that his acquaintance with Squirrel risks complicating this approach.

Mickey postpones going through with his assigned jobs, instead indulging in alcohol and prostitutes in a hotel room. During conversation with Jackie, Mickey also reveals that he has violated his parole, and doesn’t seem to care about or really comprehend the consequences, instead going on unrelated drunken tangents. It becomes clear to Jackie that the respected hitman has lost his nerve and ability to do his job. Jackie eventually decides to carry out the hit on Squirrel himself. He convinces Driver to arrange Mickey’s arrest before the job has been completed.

Russell is arrested on a drug possession charge and ostensibly deported; meanwhile, Jackie confronts Frankie and convinces him to trade Squirrel’s whereabouts for his life. Jackie has Frankie drive him to Squirrel; upon reaching Squirrel’s apartment complex, he kills Squirrel with a shotgun.

After confirming Squirrel is dead, Jackie has Frankie drive him to get his car several hours away. Frankie becomes very nervous and begins speeding, so Jackie convinces Frankie to let him drive. Once they arrive at the parking garage, Frankie is killed by Jackie. Jackie then wipes down any fingerprints he might have left and leaves the scene.

On the night of the presidential election, Jackie meets with Driver to collect his fee for the three hits. On the TV in the bar, Barack Obama is giving his election victory speech. Jackie alleges that at $10,000 each, Driver has underpaid him for the jobs—on the argument that it would have cost $15,000 to have Mickey kill Squirrel. Driver responds that Dillon charges ten, and tells Jackie to take it up with Dillon. Jackie tells Driver that Dillon died that morning. Referring to Obama’s speech, Jackie says angrily, „This guy wants to tell me we’re living in a community? Don’t make me laugh. I’m living in America, and in America, you’re on your own. America is not a country; it’s just a business. Now fucking pay me.” The film smash-cuts to black, leaving the issue unresolved.