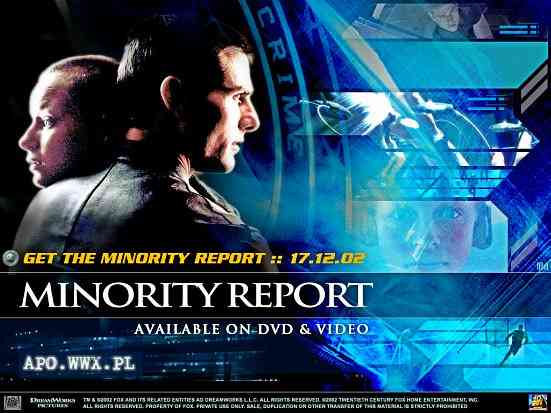 PLOT – In April 2054, Washington, D.C. has a special police force called PreCrime that stops murderers before they act. Murders are predicted using three Precogs, mutated humans who „previsualize” crimes by receiving visions of the future. Over the past six years, PreCrime has successfully reduced the city’s murder rate to zero, and the Federal government is on the verge of adopting it, even though the public finds it controversial. Captain John Anderton (Tom Cruise), the leader of PreCrime, has been suffering from drug addiction since the unresolved disappearance of his son, Sean, which led to his wife, Lara (Kathryn Morris), divorcing him. With PreCrime poised to go nationwide, the system is being audited by Danny Witwer (Colin Farrell), an agent from the United States Department of Justice. In the middle of the audit, the Precogs generate a new prediction, one saying that Anderton will murder a man named Leo Crow in thirty-six hours. Anderton does not know Crow, but he flees the area as Witwer begins a manhunt.

Anderton seeks the advice of Dr. Iris Hineman (Lois Smith), the creator of PreCrime technology. She reveals that sometimes, one of the Precogs, usually Agatha (Samantha Morton), has a different vision than the other two Precogs, which is called a „minority report”. The existence of minority reports has been covered up, since they would damage the system’s credibility. Thus, the key to proving Anderton’s innocence lies in accessing and downloading the minority report. As a result of this conversation, Anderton realizes that PreCrime is flawed, and that the government needs to shut it down.

Since cities in the future are covered with optical recognition systems, Anderton goes to a black market doctor (Peter Stormare) for a dangerous eye transplant. He then travels back to PreCrime and kidnaps Agatha. The system shuts down because all three Precogs must be connected to operate. Anderton then takes Agatha to a hacker to extract the minority report of Leo Crow, but he is dismayed to find that no minority report exists. At this time, Agatha shows a vision of the murder of Ann Lively, a woman who was drowned by a hooded figure in 2049.

With his future murder of Leo Crow approaching, Anderton heads to Crow’s apartment to investigate. There, he finds hundreds of photos of children, among them Sean’s, and concludes that Crow is a serial child killer. Crow appears in the room and confesses to kidnapping and murdering Sean. Anderton feels tempted to kill Crow, but resists after Agatha begs him not to, reminding him that people have free will. Crow then confesses that he was hired to plant the photos and be killed, in return for his family receiving money. Crow grabs Anderton’s hand and pushes the trigger, killing himself and effectively committing suicide by cop.

Anderton and Agatha run to Lara’s house outside the city for refuge. There they learn that Lively was Agatha’s drug-addicted mother, who had sold Agatha to the PreCrime program. Later, after Lively had cleaned herself up and attempted to reclaim Agatha, she was murdered. Anderton realizes that he is being targeted for knowing about Lively’s existence and her connection to Agatha.

Witwer arrives at the scene of Crow’s death, but recognizes signs that Anderton is being framed, since only a staged event would have so much evidence lying around. He examines the footage of Lively’s murder from years before, and discovers that it is not one vision, but two visions combined. The first was a failed attempt on Lively’s life, which was stopped by PreCrime, but the second succeeded. Witwer reports his finding to the director and founder of PreCrime, Lamar Burgess (Max von Sydow), but Burgess responds by killing Witwer using Anderton’s gun retrieved from the Crow crime scene, then wipes his own fingerprints off the gun. PreCrime, having been taken offline after Agatha was kidnapped by Anderton, is unable to foresee or record this murder.

Anderton is captured for the murder of Crow. With no record of how Witwer was killed, Anderton is framed by Burgess with circumstantial evidence for the murder of Witwer as well. As a result, Anderton is placed into a coma-like stasis by PreCrime officers. While Anderton is held in-stasis inside the PreCrime facility, Agatha is plugged back into the PreCrime system, bringing it back online. While attempting to comfort Lara, Burgess accidentally reveals himself as Lively’s murderer. Lara frees Anderton by holding the warden prisoner at gunpoint. At a banquet that Burgess is attending to celebrate the success of PreCrime, Anderton plays an unaltered video of Agatha’s vision of Lively, revealing that Burgess was the murderer. When Burgess chases after Anderton, a new report appears at PreCrime: Anderton is the victim and Burgess the murderer.

Anderton, after being cornered, summarizes Burgess’s crime. Since Agatha is critical to the success of PreCrime, Burgess could not let Lively take her back. He arranged for a hitman to kill Lively, which in turn was witnessed and stopped by PreCrime officers. After the 'murder' was thwarted, Burgess killed Lively in exact same manner as the first attempt, making the murder look like an 'echo' to PreCrime. Anderton then explains to Burgess that he has been thrown into a Catch-22 dilemma: If Burgess kills Anderton, he will be imprisoned for life, but PreCrime will live on; if he spares Anderton, the PreCrime system will be discredited and shut down. Anderton reveals the ultimate flaw of the system: once people are aware of their future, they are able to change it. Unable to choose between life imprisonment and public humiliation, Burgess asks for Anderton’s forgiveness and commits suicide by shooting himself.

After Burgess’s death, the PreCrime system is shut down and all prisoners are pardoned, although many are placed under surveillance in case their future crimes actually occur. Anderton and Lara remarry and start a new family after Lara reveals her pregnancy. The Precogs are sent to an „undisclosed location,” a small, uncharted island in the North Atlantic Ocean, to live their lives in peace.