The Haunting of Helena 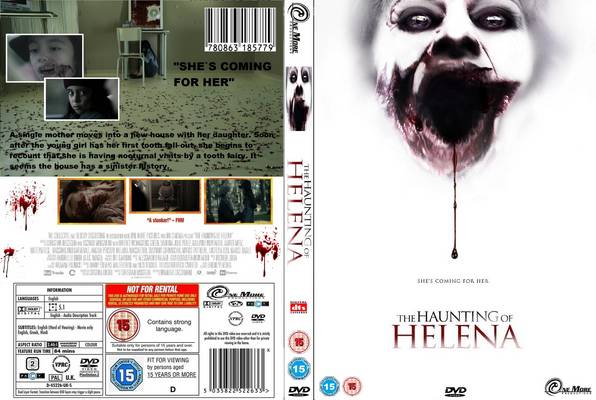 PLOT – Sophia is a recently divorced college professor who lives in Italy with her daughter Helena. The two of them are in a car accident on the same day that Helena loses her first tooth, and soon afterwards Helena begins to report strange visions to her mother. Investigating the history of the apartment in which they live, Sophia discovers that during the rule of Mussolini’s Fascist party, the man who lived there brutally tortured his wife by removing her teeth and locking her in a closet to die. Helena begins speaking to an invisible apparition in the closet, and later begins buying teeth from other children at school, saying that she needs to give them to the tooth fairy. A teacher from her school investigates this cruel and unusual behavior, only to be attacked by a swarm of mosquitoes and killed. After ignoring a warning to leave the apartment from the elderly man who lives upstairs, they are attacked by the toothless ghost of the woman who died there. Sophia throws the teeth at her and they escape while she attempts to insert them into her mouth.

Eighteen months later, Helena has been institutionalized and is completely nonverbal. Her father has returned to Italy, and believes that Sophia is no longer capable of looking after her. While Helena is alone in her room, bloody teeth begin to rain from the ceiling, only to vanish moments later. The door to the closet in which the woman died begins to appear in other locations, and when Helena’s father opens it he is consumed by a swarm of mosquitoes and killed. The doctors at the institution begin to question Sophia’s fitness as a parent as her behavior becomes increasingly erratic, and the pressure on her intensifies when her dead ex-husband’s bloody teeth are found in Helena’s locker. She begins to have visions of the murderer standing at the window of the abandoned psychiatric wing of the institution, and goes to investigate it.

Locating the murderer’s file, Sophia is able to piece the evidence together and discover the hiding place of the dead woman’s teeth. When the closet door appears to her again she throws them in, believing that it will satisfy the spirit. Helena immediately begins to speak again, and it appears that the haunting has come to an end. When she views a recorded interview with the murderer, however, she discovers that his wife was a serial killer who preyed upon children, eating the flesh from their faces, and he killed her in order to stop her from killing others. It is revealed that the elderly man who tried to warn Sophia witnessed her crimes as a child. Running through the institution, she comes across a patient whose face has been mauled, and he tells her that the ogre has her teeth once more. Reaching Helena’s room, she walks in, then slowly backs out. She finally collapses and screams in horror.

Some time later, Sophia is a patient at the same institution. She is shown sitting on a bench, looking up at the abandoned psychiatric wing. Helena’s ghost is now standing at thewindow along with the dead woman’s husband, trapped in place with half of her face missing.
GATUNEK – Horror, Thriller