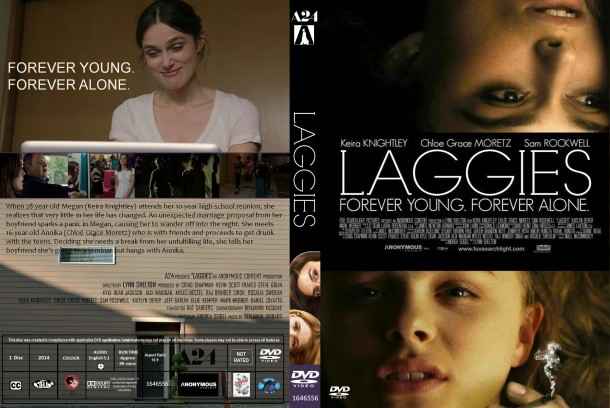 PLOT –  Megan (Keira Knightley) is an aimless twenty-eight year old who is in a committed relationship with her high school sweetheart and is still close with her high school friends. At her friend Allison’s (Ellie Kemper) wedding, her boyfriend unexpectedly proposes marriage. She also sees her father cheating on her mother. Shocked and confused, she flees and runs into teenager Annika (Chloë Grace Moretz) and her friends. After buying them alcohol, Megan plays with their skateboard. When they ask her to join them on their night out, she does.

Returning home, Megan’s boyfriend suggests that rather than have a big wedding they elope. Megan agrees but delays the wedding by pretending that she has a week-long career advice seminar to attend.

Megan receives a call from Annika asking her to pretend to be her absentee mother at a guidance counsellor’s meeting. Megan goes to the meeting and afterwards asks Annika if, in return, she can stay at her house.

Annika is unsuccessful at sneaking Megan into her house, where her single-parent lawyer father Craig (Sam Rockwell) questions Megan about her relationship with his daughter. Megan lies that there was a gap between her lease expiring and her moving to a new apartment. Craig reluctantly allows her to stay and gradually begins to trust her. Annika asks Megan to drive her to her estranged mother’s house to see her for the first time in years.

Craig asks Megan to go out drinking and they later have sex. The next morning, he offers to let her stay in his home longer than the week she asked for, but she declines.

Annika, seeing them kiss, tentatively tells Megan that she approves of the relationship. Megan reveals that she is still engaged after Annika finds the engagement ring in Megan’s purse and that Craig has no idea. On the way home from shopping for Annika’s prom dress, the two begin fighting, causing Patrick to accidentally crash the car. He tells Megan that he has been drinking the wine that she bought for them because he is upset that his parents are sending him to boarding school in the fall. Feeling guilty, Megan tells the police that she was the one driving the car. She still has alcohol on her breath from that morning and is arrested. When Craig arrives to free her, Megan reveals her engagement as well as the fact that she bought alcohol for his daughter.

Megan’s father picks her up from the police station. He says he has confessed his cheating to her mother and they are still trying to work things out.

Misty shows up at Megan’s door with the white dress Megan bought and a few other things left over from the car crash. She tries to convince Megan to go to prom. When Anthony comes down the girls lie and say Misty is a girl Megan was mentoring at the seminar. Once he goes back upstairs Misty offers her a ticket for prom, urging her to go one last time but this time saying to do it for Annika.

Even then Megan continues to lie to her fiancé about where she had been for the past week. At the airport he takes a selfie and sends it to their high school friends. Megan, realizing that their relationship is stifling her, breaks up with him, unfriends all of her high school best friends and proceeds to go to Annika’s prom, where she tells Annika to be honest and pursue Junior, a friend whom she is in love with. Megan goes to Craig’s house, and leaves him a note on a box of wine asking him to check one of two boxes labeled 'yes' or 'no' to the question 'Can we try again?', and knocks on the front door. Craig answers the door, reads the note, sees her at the bottom of the steps and closes the door on her, but after she knocks again and tells him she has fallen in love with him, he lets her in.