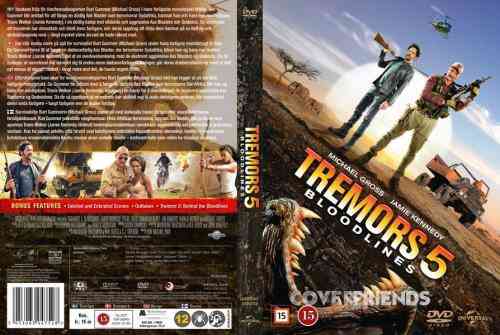 PLOT – 12 years after the TV series, Burt Gummer (Michael Gross) is now a star in his own series about survival, taking place in Perfection. He is approached by filmmaker Travis Welker, (Jamie Kennedy) who wants to help expand his brand, made famous by his series; he becomes Burt’s new cameraman. Travis says he’s from Florida, where Burt seems to have some history. Erick Van Wyk from the South African Wildlife Ministry asks them to deal with an Ass-Blaster problem. After Erick agrees to pay them for their services, Burt and Travis head to Africa to hunt down the creatures. Burt becomes friends with the pilot of their helicopter, Dan Bravers, who explains to him that a monster hunter and a monster have a strange attraction, reminding Burt of El Blanco. Burt is upset to find that South African gun laws have impounded the heavy weapons he was bringing. They arrive at the Cradlestone Reserve and meet Dreyer, who has tranquilizers to sedate and capture an Ass-Blaster. Burt has come prepared to find Graboids as well: „If you got Ass-Blasters, you got Graboids.” When Burt sees a Video of the Ass-Blaster, he realized that this is a new kind of Ass-Blaster.

At a dig site nearby, a couple of paleontologists, Dr. Michael Swan (Emmanuel Castis) and his girlfriend Lucia (Natalie Becker), discover the fossilized remains of a Graboid, which Swan expects to make him famous. Meanwhile Burt and Travis arrive at the animal refuge, where they meet some of the refuge workers. Travis befriends a little girl from the camp named Amahle (Nolitha Zulu) and meets her veterinarian mother Nandi (Pearl Thusi). Erick shows Burt the guns they have provided, but the power of most of the guns is too low to kill graboids, which confirms their intent to capture one alive. Meanwhile, at the dig site, Michael and Lucia celebrate in the shower together, but they are attacked and eaten. One of the people from the refuge finds the remains, and alerts the others, who go to investigate. Burt sees the fossil and realizes that the creature is a different breed of Graboid, better evolved than the North American breed.

That night, Travis ignores Burt’s imposition of a curfew, and attends a local tribal dance with Nandi. Back at the refuge, Thaba and Baruti (one of the workers) are setting up equipment and come face-to-face with two Ass-Blasters. Thaba kills one with his machete, and tries to kill the other one. Burt arrives and tries to shoot it, but it’s too late, as it carries Thaba away. Burt and Dreyer track it to a bridge, where they find a badly-wounded Thaba. The Ass-Blaster attacks Burt and he shoots at it, then saves Dreyer by hurling a machete into the creature. Thaba, however, is carried away. Burt orders the refuge evacuated, and yells at Travis for not being there when Burt needed him. Nandi gives Burt an assault rifle (mistakenly identified as a machine gun in the film) she has acquired, and Burt, Erick, and Dreyer head out to hunt the Ass-Blaster.

When they find an Ass-Blaster, Burt throws out a flare. Dreyer panics and the Ass-Blaster attacks him. Burt saves him and shoots down the creature, but it explodes and ironically it falls on Dreyer, killing him after all. Burt finds that the Ass-Blasters have been laying Graboid eggs. Erick reveals himself to be a poacher, planning to sell the eggs on the black market. He knocks out Burt and locks him in the metal cage. During his time trapped in the hot daytime sun, Burt becomes delirious, and encounters a hungry male lion (whom he dubs „Pussy”). He videos his goodbyes to his HK41 and to Heather (Burt’s wife in the first Tremors movie, played by Reba McEntire). Travis arrives to rescue Burt, but the truck’s fuel line is broken by a rock, so they head back to the refuge on foot.

At the refuge, an Ass-Blaster attacks Baruti, Nandi, and Amahle. Nandi discovers it destroyed a transformer while Baruti hides Amahle in the kitchen. The Ass-Blaster crashes into the kitchen and attacks them. After Baruti shoots it, Nandi is able to finish off the Ass-Blaster with her bow and arrow.

In the desert, Burt and Travis find Erick’s truck crashed and blood everywhere. They head on after finding a phosphorus grenade, and some weapons. Soon they see a wounded and bloody Erick fleeing a submerged Graboid. A Graboid tentacle grabs the case holding the egg from Erick’s grasp as he runs to the rocks; surprisingly, these tentacles can detach from the Graboid , and they slither onto the rocks to attack Erick. Burt shoots the tentacles, but the giant graboid eats Erick. Burt is angry at this new version of graboid anatomy, and concludes the Graboids need to recover their eggs, possibly the last set for African breed. They know they have to enter the Graboid nest, the cave where the egg was taken. Burt (still recovering) reluctantly agrees to let Travis go in alone, and use the phosphorus grenade on the nest, while Burt contacts Dan Bravers to help them.

Making his way past the cave paintings, Graboid remains, and human skeletons, Travis stumbles on Thaba’s corpse. He encounters the Ass-Blaster, which has laid more than a dozen eggs. Fleeing the cave, he has to use the grenade to blow up the Ass-Blaster. But when Dan arrives in his copter bringing more supplies, he and his co-pilot are swallowed by the huge Graboid that Burt dubs „The Queen Bitch.” Reaching the copter with the help of some stampeding cattle, they fire Dan’s salvaged rocket pods into the cave, obliterating the nest. Amazingly, Dan shows up covered in Graboid ooze, explaining the Graboid was „10 meals ahead, but 20 craps behind”, and spit him out after he shot it from the inside. He flies them back to their truck with some gas, and gives Burt his FN MAG machine gun. After all of the veiled references, Travis reveals to Burt that he is indeed Burt’s son, the child of a one-night-stand back in Florida; having heard of Burt’s exploits, Travis wanted nothing more than to be like his father. Narrowly escaping another attack, they head back toward the refuge.

At the refuge, Nandi, Baruti, and Amahle try to get to their truck, and Baruti kills another Ass-Blaster by firing a shotgun through the metal roof. A submerged Graboid finds the trio, but can’t get to them through the concrete slab. They attack it with a gasoline-soaked truck, which Nandi explodes with a flaming arrow. They head for the village, and discover that Amahle is hiding a Graboid egg (which was why the creatures were singling out the refuge for attack). At the village gas station, they cannot save the owner, who is killed by a Graboid that was attracted to his radio. They are shocked to find that Amahle has wandered away from the Range Rover with the egg. Burt and Travis arrive, finding the village under siege and tentacles surrounding Amahle and the egg.

Travis uses a motorcycle to grab the egg bag, and Baruti gets Amahle to safety. They shoot the tentacles but the „Queen Bitch” arrives and barely misses Travis. Nandi suggests they use the daily lightning storm to kill the Graboid. Travis lures it away on his motorcycle, then back to the village where the villagers have rapidly built a lightning trap. As the storm erupts, Nandi places the egg on the tribal pedestal, next to a tall lightning rod. Burt, Nandi, and Baruti pummel the Graboid with their weapons, and a lightning bolt hits, electrifying the ground trap. The Graboid is forced to surface, and two more huge lightning strikes destroy the egg and then the Graboid.

Afterwards, Burt accepts Travis as his son, inviting him to join him in his work; a mid-credits scene shows that Travis and Burt now work in a reality show, where they kill monsters around the globe.