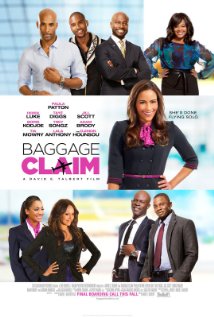 PLOT: Flight attendant Montana Moore (Paula Patton) says that her mother Catherine (Jenifer Lewis) has always been big on marriage. Not surprising, since it’s shown that she’s been married many, many times. Unfortunately for Montana, her relationships have never worked out. She is practical about the kind of man she wants (he must be faithful, not care about work more than her, not have an attitude, and financially secure), but she mostly doesn’t want to be alone.

Recently, Montana’s met the man who might be „the one” – Graham Jackson (Boris Kodjoe). She finds out from her friend and neighbor William (Derek Luke) that Graham wrote her a letter inviting her to spend Thanksgiving with him in Chicago. She also tells her fellow flight attendant friends, the promiscuous Gail (Jill Scott) and her gay BFF Sam (Adam Brody), excitedly thinking that this might be the weekend where Graham proposes to her. Before Montana leaves, Sam gives her a necklace from his grandmother to find true love while Gail gives her cranberry-flavored condoms.

Montana and Graham take a romantic boat ride to his place and later have sex. Instead of taking her back to his place, however, Graham leaves Montana at a hotel while he goes to prepare for a business meeting. Montana calls Gail to express her concern, which makes Gail suspicious that Graham is hiding another woman. Montana reluctantly (and clumsily) sneaks over to Graham’s place and sees that he is indeed preparing for a business meeting, leading her to think that she has finally found the perfect guy to share her life with. That’s when another woman enters into the room, and she is pregnant. Montana realizes that she was the mistress and she leaves sadly.

William hears Montana playing the same sad song over and over, so he cheers her up by cooking her a meal. Later, Montana visits her mom and sister Sheree (Lauren London) to find out that Sheree has just gotten engaged. Montana thinks it’s too soon as Sheree is still just a college sophomore, but she insists that her fiancee is just perfect. She asks Montana to be the bridesmaid at the wedding, which causes her more distress. She expresses to Gail and Sam how she doesn’t want to show up to her sister’s wedding alone, especially since her mom will nag her about staying single. Montana decides she must find a husband within 30 days or risk showing up to that wedding alone. Sam comes up with the plan of just „coincidentally” bumping into one of her exes by meeting them on one of their flights across the country to see which one is right for her, and since he’s done favors for several people who work for the same airline as them, they owe him and can fix Montana’s work schedule to coincide with the flights of these men. Gail is against the idea as she knows it is illegal, and because she knows her best friend doesn’t need a man to define her.

The first ex Sam checks on is Damon Diesel (Trey Songz), a rapper who is supposedly wealthy enough for Montana to go back to. Before she can make her decision, Catherine visits Montana to tell her that she has failed her daughter in finding her a man. Montana clearly doesn’t wanna hear it and then goes back to Sam so he can give her Damon’s flight time. She gets a ride to the airport from William, who is skeptical about her plans, but he wishes her luck.

Montana „bumps into” Damon on his flight to Houston, and they seem to be hitting it off well. He takes her back to his place to get in the bathtub. Turns out the place really belongs to Damon’s nutty co-worker Janine (Tia Mowry). It also turns out that Damon is broke and is mooching off of Janine. He tells Montana to leave through the fire escape as Janine breaks down the door and tries to attack Damon.

Gail tells Montana that Bachelor #2 is going to D.C. and Montana has an hour to catch the flight. She meets an ex named Langston (Taye Diggs) as well as another ex named Curtis (Tyler Lepley). Montana gets off the plane with Langston, who says he’s running for Congress. That evening, Langston takes Montana to meet with potential campaign contributors, the Donaldsons (Ned and Sandra Beatty). On their date, Langston takes control of what happens, including ordering Montana’s drink for her even when she tries to order something else. Although he secures funding from Mr. Donaldson, the man starts making suggestively condescending remarks about Langston representing his „people”, and it gets more awkward when Montana gets in on the jabbing. Donaldson later doubles his contribution because her Tiger Woods joke made him laugh. Langston tells Montana that if she is gonna stick with him, she needs to stay seen and not heard. It’s also obvious that Langston loves his dog Juicy more than anyone. Montana angrily leaves and takes the outfit he gave her, then calls William to drive out to Georgetown to pick her up.

William takes her back to his place to watch a movie and they have a drink while checking out their old high school yearbook. They dance to a song they listened to at their prom and then fool around for a bit before they kiss. However, this turns out to have just been a dream Montana had as she fell asleep on William’s shoulder.

Montana wakes up to find Catherine sitting next to her on the bed. Montana gets fed up with her mom’s constant butting into her life, so she lies and says she’s got a date to Sheree’s rehearsal dinner. She takes William to get fitted for outfits for the dinner. It starts getting more obvious that there’s a connection going on between them. Montana then gets a text from Sam telling her to get to the airport.

With 16 days left, Montana keeps meeting up with other exes, but they only continue to disappoint her and she continues to grow more frustrated. On another flight, Montana sees William’s girlfriend Taylor (Christina Milian) with another man. Taylor asks Montana not to not tell William about it since she claims they just broke up. She then asks Montana for some tea, which pisses her off.

Montana calls William in the middle of the night to talk, but discovers that Taylor is there with him. She grabs the phone from William and hangs up on Montana. Montana then later gets drunk and sings karaoke at a bar, attracting the attention of an ex-boyfriend named Quentin (Djimon Hounsou). He treats her to a meal and reveals that he owns the hotel she’s staying at. He makes it clear he’s set on traveling and seeing the world instead of getting married, but he tells her that if she’s looking for marriage, she should let it come to her. As a gift, he gives her a diamond bracelet, but she goes back home feeling defeated.

William visits Montana to express his feelings about her whole plan, but she rudely tells him off and tells him about Taylor, but he just leaves upset with her.

The night of the rehearsal dinner comes, and Catherine brags that Montana has an announcement to make. Before Montana says anything, Langston shows up to propose. Catherine jumps to answer before Montana can, but she rejects him before everybody. She tells everyone how she’s been going around looking for somebody to marry so everybody can accept her as an equal, but she realizes she doesn’t need marriage to define her, and she’s come to find herself along the way. She also tells Sheree that if she really loves her man, she supports her, but if it’s for any reason other than love, it would be a mistake. Sheree and her fiancé admit they rushed into the engagement because of her mother. They agree to wait until they graduate and get to know each other before marrying.

Outside, Catherine apologizes to Montana for pressuring her and her sister into marriage because she didn’t want them to end up like her with multiple husbands. She admits that Montana’s father was her first and only true love until his death. Catherine tells her to never let go of her true love when she finds him. They hug.

While having food with Gail and Sam, Quentin comes to visit Montana. Gail tries to push her to see him, but Montana tells him that she wants more than expensive gifts and adventures, and she won’t settle for anything less. Quentin agrees with her and she gives him back the bracelet. Gail thinks she’s crazy for letting him go and then spots a gift from William. Montana opens it to find a box of Cracker Jacks as a reminder of when he proposed to her as kids with a toy ring. Inside the box is also a plane ticket to France. The flight is at 11:45 PM that same evening.

Montana and her friends rush to find a cab to get to the airport while William is there to get to France. Sam informs his airline buddies to stall William until Montana gets there. She runs to the gate too late and misses the flight but runs into William. He confesses his love for her and then proposes to her for real. She accepts and they kiss.

As Gail and Sam leave the airport, Montana tries to set them up with the same man. They fight for him as the film ends.