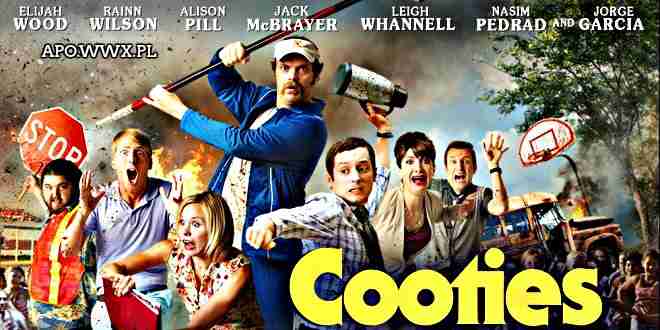 During class, Shelly, who had been experiencing numerous symptoms, brutally attacks her classmate, Patriot (Cooper Roth) and Clint, resulting in the former being infected with the virus. Shelly turns feral and spreads the infection throughout the school, resulting in the other children becoming infected and attacking the school staff and the authorities. Clint, Lucy, and Wade, along with surviving staff members Tracy Lacey (Jack McBrayer), Rebbekah Halverson (Nasim Pedrad), and Doug (Leigh Whannell), hide in the faculty lounge. After escaping with an uninfected student, Calvin, the staff barricade themselves in the music room, but are discovered by Shelly. Wade notices Clint has been infected by Shelly and quarantines him, but Doug deduces that the virus doesn’t affect him like it does the children. The staff decide to wait until the parents arrive to pick up the children, but lose hope upon seeing one child kill his oblivious mother. They manage to rescue another child, Tamra (Morgan Lily), but discover she has been infected.

The staff are attacked by the children again, and Wade kills Dink (Miles Elliot), one of the infected children. Doug analyzes his brain and realizes that the virus is only dangerous to the prepubescent, which is why Clint and Tamra didn’t turn feral. The staff and uninfected children unite with the janitor Mr. Hatachi (Peter Kwong), but Calvin passes out due to diabetic shock. The group opts to send Clint through the ventilation system to gather a chocolate bar for Calvin, Wade’s truck keys, and their cellphones. Lucy joins Clint and the two confess their feelings to each other. Wade also apologizes for his behavior over a walky-talky. Though they discover the cellphones to have been destroyed by Patriot, they manage to secure a chocolate bar and revive Calvin. The group then reunites and, utilizing various tools in the school as weapons, battles the children on the playground and manages to escape. However, Wade is seemingly killed by the children.

After killing Patriot, who had stowed away on Wade’s truck, the group arrive in the nearby town of Danville, only to discover it has been similarly overrun. The group realizes that the infection has spread across North America, and they are attacked by a horde of infected children. They barricade themselves inside a funhouse and manage to retrieve a contaminated chicken nugget, but discover that the infected children, including Shelly, are inside the funhouse. However, Wade and Mr. Hatachi arrive and rescue the group, setting the infected children on fire. They then escape in crossing guard Rick’s (Jorge Garcia) van, driving out of the town.