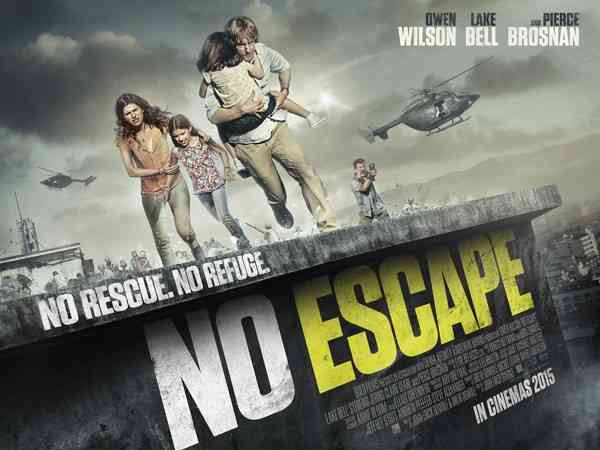 – In an unnamed Southeast Asian country, a group of armed rebels stage a coup and assassinate the prime minister after a meeting with a foreign diplomat.

17 hours earlier, an American engineer named Jack Dwyer (Owen Wilson) is flying to Southeast Asia with his wife Annie (Lake Bell) and two daughters Lucy (Sterling Jerins) and Beeze (Claire Geare) to start a new career with an American engineering firm. Upon landing, they run into a British expat named Hammond (Pierce Brosnan), who offers them a ride with him and his friend Kenny (Sahajak Boonthanakit) to their hotel. When they arrive at the hotel, Jack notices that the phone lines and television are not working. When he goes to the front desk, he is informed that the phones, television and internet are down all over the city. He then stops by the bar and has a drink with Hammond, who tells Jack that he will enjoy it there.

The next morning, Jack leaves the hotel to find a newspaper. As he is leaving the newspaper shop, he finds himself in the middle of a standoff between many armed demonstrators and city police in riot gear. The two forces clash violently, with the rebel demonstrators gaining the upper hand and routing the police. Jack is forced to flee amid the chaos and makes his way back to the hotel, seeing several dead civilians and police officers along the way. When he arrives back at the hotel, he witnesses an American tourist being executed by the rebels in front of the hotel. When he is spotted, he climbs up and disables a fire escape into the hotel. Upon reaching the lobby, he sees that the rebels have already broken through the main entrance into the hotel and are killing the hotel staff and guests. He makes it back to the room but learns that Lucy is swimming in the pool downstairs. Jack barely manages to get to the pool and rescue Lucy as rebels invade the surrounding areas. Meanwhile, other rebels are going to each room killing all the foreigners, and Annie barely manages to keep them out of their room. As Jack returns to get them, he encounters a rebel in the stairwell, but is saved by Hammond, who tells Jack to get his family to the roof. On the roof, they see that most of the hotel’s foreigners have gathered there and blockaded the door. They manage to make out that the rebels, who are chanting ‚blood for water’, have already seized most of the country and are hunting down the Americans who work for the corporations that control the country’s clean water supply.

Soon, A helicopter arrives near the hotel roof. Jack soon realizes that it has been commandeered by the rebels, who begin gunning down everyone on the roof. The helicopter eventually gets tangled in some electric wires and crashes onto the roof. The surviving rebels are joined with more who have broken through the blockaded door onto the roof and begin shooting the surviving foreigners. Jack and his family manage to make it to the neighboring building, but it is hit by a rebel-operated tank. In the ensuing chaos, Jack manages to hide them from the rebels who swarm the building and kill everyone inside. After some time, they steal some clothes and a motorbike, and make their way to the American embassy. On the way, they ride through a crowd of rebel demonstrators, but they manage to ride through without being noticed. Upon arriving at the embassy, they find it blockaded in both directions. Jack manages to climb over the blockade and finds the embassy deserted, with all the American personnel already dead. Jack barely manages to get away from the rebels who emerge from the embassy as it blows up. The family then goes to a Buddhist shrine nearby, and is taken in by the shrine’s old caretaker. They hide themselves until more rebels come looking for them. As they enter the compound and start looking, Jack notices one of the rebels leaves his gun unattended. He tries to take the gun stealthily but when it seems apparent that he’s going to be found, Annie reveals herself to buy Jack time. Jack then manages to get ahold of the gun, but finds that is empty. He is then beaten, restrained, and forced to watch as the rebels try an effort to rape Annie. Lucky, they are saved just in time, by Hammond and Kenny, who dispatch the rebels.

The two then take the family to a nearby brothel, which is relatively safe for Jack and his family. As they eat a barbecued dog for dinner Hammond explains to Jack that people like him are responsible for the arrival of American corporations which seize control of basic resources of the country, like water supplies that Cardiff operates, which led Jack to be transferred to Asia. Hammond cites this as reason enough to help Americans like Jack and his family escape the country. The plan is to make it to the nearby river, commandeer a boat, and sail downriver to the Vietnam border.

A few hours later, the group comes under fire by rebels in a nearby gun tower. They manage to escape, but Kenny is killed and Hammond is badly wounded. He manages to ensure the family makes it safely to the river by sacrificing himself to take out a rebel truck following them. Near the riverbank, Annie and the kids hide as Jack finds a fisherman and trades his watch and shoes for a boat. At that moment, rebels come across the fisherman and Jack, who briefly fights them before being overpowered and shot in the arm. Seeing this, Lucy runs towards Jack, and is caught by the rebel group’s leader, who forces a gun into Lucy’s hand and attempts to make her shoot Jack. However, Annie intervenes and beats the rebel leader with a rod, allowing Jack to seize the gun and shoot the rebels. The family then gets into the boat and begins sailing downriver. Some time later, they are spotted by the nearby rebel forces as well as the Vietnam Border Defence Force. After pleading for the Vietnamese to spare them, the boat passes into Vietnamese waters and the troops force the rebels to stand down. The family then embraces each other, having finally reached the end of their ordeal.

Later, in a Vietnamese hospital, Jack and Annie narrate to the kids the story of how Lucy was born.