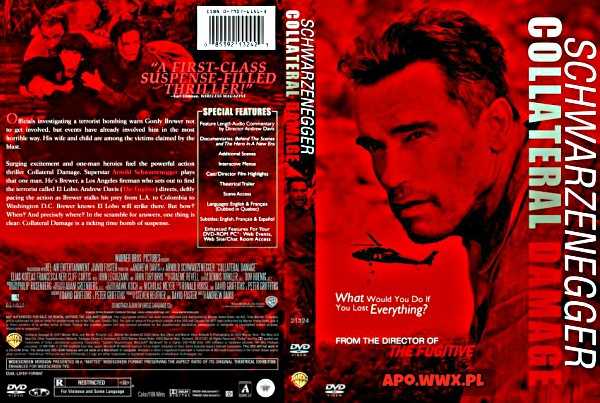 PLOT – A bomb detonates in the plaza of the Colombian Consulate building in Los Angeles, killing nine people, including a caravan of Colombian officials and American intelligence agents. Among the civilians killed are the wife and son of LAFD firefighter, Captain Gordon „Gordy” Brewer, who was injured in the explosion. A tape is sent to the U.S. State Department, in which a masked man calling himself „El Lobo” (The Wolf) claims responsibility, explaining it was in retaliation for the oppression of Colombia by the United States. The FBI believes El Lobo is a Colombian terrorist named Claudio Perrini. CIA Special Agent Peter Brandt, the Colombia Station Chief, is harshly reprimanded for the incident by a Senate Oversight Committee, who promptly terminate all CIA operations in Colombia. Brandt angrily returns to Mompós and meets with his paramilitary allies to plan a major offensive to take down Claudio.

Frustrated at the political red tape regarding the investigation, Brewer travels to Mompós to personally hunt down Claudio but is quickly arrested for illegal entry. The guerrillas stage a prison break to free their comrades and abduct Brewer to demand a large ransom for him. Brandt’s unit is alerted to Brewer’s presence in Colombia but arrive too late. Brewer escapes the prison, avoids being captured, and secures a guerrilla zone pass from Canadian mechanic Sean Armstrong. Armstrong introduces him to drug runner Felix Ramirez, the manager of the cocaine distribution facility that finances the guerrillas. Pretending to be a mechanic, Brewer rigs several improvised explosives and destroys the facility. Felix is blamed for the destruction of the drug plant and is executed in front of a hiding Brewer’s eyes. Brewer infiltrates Claudio’s headquarters and plants a bomb to kill him, but he is captured when he tries to prevent a woman, Selena, from being caught in the blast radius along with her son, Mauro. At Claudio’s home compound, Selena reveals she is Claudio’s wife. She and Claudio once lost their own child during an American attack, which compelled Claudio to become a terrorist; Selena found and adopted Mauro, whose parents were killed in the attack. Nevertheless, Selena sympathizes with Brewer and admits that Claudio is planning another bombing in Washington, D.C..

Meanwhile, Brandt’s unit locates Claudio’s compound and launches an attack. During the ensuing shootout, Selena helps free Brewer and, along with Brandt, travels back to the State Department in Washington, D.C. to help the search effort for Claudio. Selena identifies Union Station as the target, and the FBI investigates. On the pretense of using the lavatory, Selena excuses herself from the command room and becomes irritated when Mauro refuses to come with her. When Brewer sees Selena make the same gesture as the masked man who claimed to be El Lobo in the tape, he realizes that she was the Wolf all along, and Claudio serves as her figurehead. Furthermore, Brewer surmises the real target is the State Department, and that he was used to help Selena get past the building’s security. Brewer quickly throws Mauro’s toy dinosaur, which is carrying a bomb, out a window moments before it explodes. Brandt, realizing Brewer’s suspicions, is shot and killed trying to stop Selena from fleeing the building.

Brewer chases Selena to the basement of the building where she and Claudio ride off through the underground tunnels on a motorcycle. Brewer finds the tunnel control console and shuts the gates, preventing their escape. Brewer chops open some gas lines along the walls of the tunnel and, as they ride back, Selena shoots at Brewer, igniting the gas. Brewer jumps through a doorway just as the entire tunnel explodes. Selena and Claudio survive the blast, however, and attack him simultaneously. After a short, hand to hand fight, Selena is electrocuted by being tossed on the exposed circuitry of the control panel, and Claudio is finally killed when Brewer throws an axe into his chest.

In the aftermath, Brewer carries Mauro in his arms as they leave the State Department. A newscast voiceover explains that Brewer will receive the Presidential Medal of Freedom for preventing one of the worst terrorist attacks in U.S. history from taking place.