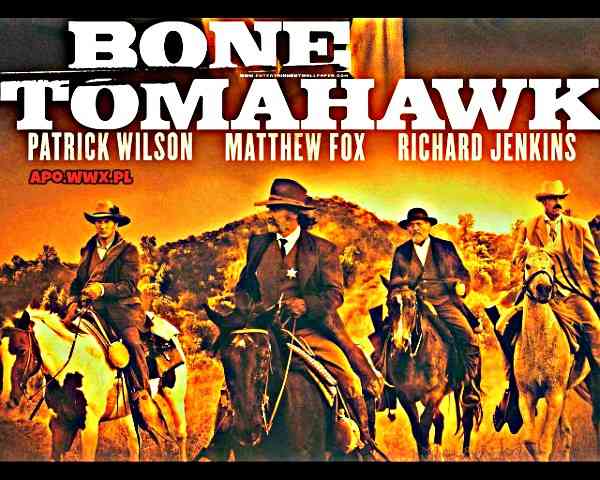 PLOT – The film takes place in the 1890s or early 1900s, with two men, Purvis and Buddy, attacking and killing travelers camping in plains of the Wild West. After killing several men at a campsite, they steal their valuables and burn any unneeded possessions. However, they desist after hearing a bizarre series of howls in the distance, and make for a nearby valley to avoid any pursuers. While traversing the valley, they come across a burial site, where Buddy is attacked and savagely killed by an unseen figure. Purvis fires upon the figure as it charges at him, and the film cuts to black.

Sometime later, Sheriff Franklin Hunt (Kurt Russell) is advised by his forgetful and elderly „Back Up Deputy” Chicory (Richard Jenkins) that he spotted a drifter on the plains outside of their small frontier town, Bright Hope. He tells Hunt that he saw the drifter bury clothes that were stained with blood, before heading for the local bar, The Learned Goat. Sheriff Hunt and Chicory head to The Learned Goat to confront the drifter, revealed to be Purvis. Also present is John Brooder (Matthew Fox), an educated local man, reputed to engage in frequent trysts with local wives. While questioning Purvis, Hunt shoots the man in the leg after he attempts to flee. He and Chicory remove Purvis from the premises and transport him to the Sheriff station while Brooder watches.

At the same time, Arthur O’Dwyer (Patrick Wilson) recuperates from a broken leg at home, and is tended to by his wife, Samantha (Lili Simmons). Samantha possesses medical expertise and assists the local doctor, a drunkard who is rarely sober enough to make house visits. Brooder arrives at the O’Dwyer residence and requests Samantha’s presence for Sheriff Hunt, in order to remove the bullet from the drifter’s leg. Samantha agrees, and Brooder promises to escort Samantha and nothing more after Arthur threatens him if he attempts to flirt with his wife. Brooder escorts Samantha to the station without incident, where Sheriff Hunt and Chicory leave her and Purvis in the care of another deputy, Nick. Brooder, Hunt, and Chicory depart, but later the same night, a black stablehand named Buford is attacked and savagely murdered by a number of shadowy figures in a barn. When Hunt awakens the next morning, he is informed of the attack, and also learns that everyone at the station has disappeared. Hunt investigates the murder, and finding no immediate culprit, heads to the station. There, he discovers an arrow embedded in a post.

Hunt assembles a meeting at The Learned Goat, where a local Native American man known as „The Professor” tells Hunt that the arrow is from a group of primitive Native Americans, referred to as „Troglodytes”, that became cave dwellers years ago, are not considered true Native Americans by any real tribe, and are detested for their savagery and alleged cannibalism. The group posits that the attackers took Nick, Samantha, and the drifter, but left Buford because he was black, and they wouldn’t have known if it was safe to consume him. The Professor gives them the location of the caves where they are known to stay, but warns them not to go as it would be suicide. He refuses to go himself, and recommends Hunt abandon any attempt at retrieving possible survivors. Hunt refuses, and assembles a party to track the attackers to their caves. O’Dwyer insists to come along despite his injury, as does Chicory. Brooder volunteers as well, citing a personal obligation as he escorted Samantha that night. Brooder insists that he would be most qualified to go, as he has killed many Native Americans in the past, and believes himself the most capable.

The four depart on horseback and ride nearly continuously. Brooder causes trouble amongst the group, frequently trading insults with the more simple minded Chicory and insisting that he is more intelligent and capable than any of the others. The four set up camp, only to be approached by two Mexican men on foot. Alerted to their presence, Hunt demands the two men come forward unarmed. However, Brooder guns both men down before they even get close to the camp. Enraged, Hunt draws upon Brooder, and accuses Brooder of having no reason to kill the men. Brooder insists that the men belonged to a larger party of thieves or vagabonds and could only have been scheming to attack them. He demands the party move and make camp at another location more defensible. Though disturbed by his actions, the others agree and move to a higher location. Later that night, O’Dwyer awakens to find another group of Mexicans in their camp, one of which is stabbing Brooder. O’Dwyer kills the man, and the other attackers flee on the party’s horses, save for Brooder’s, which resisted out of loyalty, but was injured in the struggle. Brooder reluctantly euthanizes the horse by gunshot.

The four carry on by foot, with O’Dwyer keeping pace by moving even while the others stop to rest. However, he reinjures his leg after striking Brooder for making an inappropriate comment about Samantha. Hunt and Chicory plan to amputate the leg, but O’Dwyer refuses, and demands it be set so he may follow the others. Chicory does so and provides him with drugs so that when he awakens he may continue on. Hunt marks the trail by setting patterned stones for O’Dwyer to follow. While the remaining three men walk, Chicory and Brooder discuss how Brooder’s family is never present in Bright Hope, and that Brooder never talks about them. Brooder reveals to Chicory that Native Americans murdered his entire family when he was 10 years old. Brooder admits to having killed Native American women and children, and defends his actions by insisting that they were not harmless and still knew how to fight.

Eventually, the three remaining men locate the valley and attempt to scout inside. While doing so, they are attacked by a group of Troglodytes. In the attack, all three men are injured, and Brooder loses his hand to a vicious attack by a thrown tomahawk made of bone. He demands the other two leave him with a repeater rifle and several sticks of dynamite, and reveals to Chicory that he has killed 116 Native Americans in total. Hunt and Chicory flee after providing Brooder with a cigar as his last request, as he plans to commit suicide with the dynamite in the hopes of killing as many of the Troglodytes as he can. However, Brooder is distracted by the appearance of bone windpipes lodged in a dead Troglodyte’s throat, which is revealed to be the source of the bizarre howling heard before the attack. Brooder notices another Troglodyte, and each attacks the other, with Brooder killing his attacker just as he is killed himself by another tomahawk. He fails to ignite the dynamite.

Back at the entrance to the valley, Hunt and Chicory are attacked again, knocked unconscious and taken back to the caves the Troglodytes live in. Their attackers hoist them to an entrance high on a cliff side with rope. There, they discover Nick and Samantha still alive. Nick tells Hunt that Purvis defiled their burial grounds by trespassing, prompting the Troglodytes to follow him to Bright Hope. By the time of Hunt’s arrival, Purvis had already been killed and eaten by the Troglodytes. Immediately thereafter, Nick is brutally scalped, gagged, and then cut apart from the groin while being held upside down, and then cooked and eaten in front of the others at a firepit in the caves. Samantha asks about O’Dwyer, and Chicory accidentally reveals that he will still be headed to the valley. Samantha curses Hunt for leading O’Dwyer to what will likely be his death. The three devise a plan to try to kill as many of their attackers as possible so that O’Dwyer will have a chance at defeating them. Hunt and Chicory poison two of the Troglodytes by pretending to fight over a whiskey flask that is full of a powerful sedative, which the Troglodytes take and drink. Samantha judges that one will certainly die, and the other likely will as well.

O’Dwyer reawakens and continues his journey by following the trail left by Hunt. He enters the valley and finds equipment from the others. He passes out from exhaustion after crawling into nearby bushes to conceal himself. Sometime later, a group of Troglodytes attack him. However, one of the attackers misses with an arrow, which awakens O’Dwyer and alerts him to their presence. He kills all the attackers with his pistol before they can injure him. Noticing the same windpipes that Brooder had before, O’Dwyer cuts them from a dead Troglodyte and uses them as a whistle to call any others out. Another Troglodyte attacks him, whom he kills. O’Dwyer finally makes it to the cave system, and enters from an entrance at ground level, where he kills several more Troglodytes. However, the leader of the group enters the room where Hunt and the others were taken and begins to torture Hunt for his poisoning of the two Troglodytes. Hunt is cut open at the abdomen and has the flask, which was sitting in heated coals since its contents were consumed, forced into him, and the leader then awkwardly handles a repeater rifle until learning how to reload it. Hunt screams to O’Dwyer after everyone hears the gunshots from O’Dwyer’s battle deeper in the cave, warning him of the leader having a gun. The leader shoots Hunt in the chest, but while reloading, Hunt grabs a nearby tomahawk and severs the leader’s toes and most of his foot. O’Dwyer enters at the same time and guns the leader down.

Hunt reveals that he won’t survive, and asks for the repeater so that he may stay behind and kill any remaining members of the group. O’Dwyer reunites with Samantha, and along with Chicory they exit the cave. On their way out they see two pregnant troglodyte females that have been crippled and had boar tusks shoved into their eyes. Chicory grabs a rock to defend himself with, but after leaving the valley, they hear Hunt firing upon the last remaining members of the group and head for home. Chicory leaves the rock behind as he knows Hunt has killed the last of the Troglodytes.