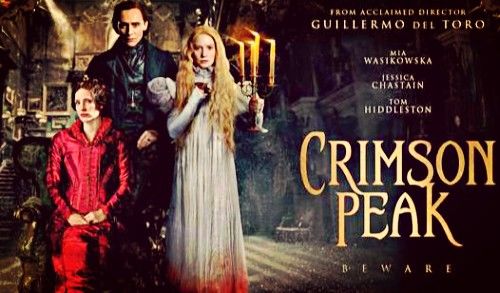 PLOT – In 1887, Edith Cushing, the young daughter of wealthy American businessman Carter Cushing, is visited by her mother’s ghost who warns her, „beware of Crimson Peak.”

Fourteen years later, Edith is now a budding author who prefers penning ghost stories to writing the romance novels that her editor wants. She meets Sir Thomas Sharpe, an English baronet who has come to the United States seeking investors, including Edith’s father, for his clay-mining invention. Disdaining privileged aristocracy and unimpressed with Sharpe’s prototype and previous failures to raise capital, Cushing rejects Thomas’s proposal. Edith mentions that Thomas and his sister, Lucille, wear expensive but outdated and somewhat-frayed fashions. Shortly after, Edith once again is visited by her mother’s spirit bearing the same warning.

Sir Thomas intends to persuade Mr. Cushing to change his mind. However, when he and Edith become romantically attached, Cushing and Edith’s childhood friend, Dr. Alan McMichael, disapprove. Mr. Cushing hires a private detective who uncovers unsavory facts about the Sharpes. Mr. Cushing confronts the siblings and bribes them into returning to England. As Cushing insisted, Sir Thomas cruelly ends his and Edith’s relationship, but the next morning, sends her a note explaining his actions. Not long after, Mr. Cushing is brutally murdered, though his death is ruled accidental. Edith and Sir Thomas eventually marry and return to England. They arrive at Allerdale Hall, the Sharpes’ dilapidated mansion, which sits atop a red clay mine. As Edith settles in, she finds that Lucille acts somewhat cold toward her while Sir Thomas remains physically distant. Edith is left confused and uncertain by their behavior.

Gruesome ghosts begin appearing to Edith throughout the mansion. To help calm Edith, Sir Thomas takes her into town. After being snowed in for the night, they passionately consummate their marriage. Lucille angrily lashes out when they return the next morning, frightening Edith. By the time Sir Thomas mentions that the estate is also referred to as „Crimson Peak,” due to the warm red clay seeping up through the snow, Edith is growing increasingly weaker and coughing up blood.

Edith explores the mansion and begins piecing clues together. She discovers that Sir Thomas previously married three wealthy women who were fatally poisoned for their inheritances and realizes she, too, is being poisoned. She also discovers the siblings have had a long-term incestuous relationship, resulting in a sickly infant that died. Lucille murdered their mother after she discovered her children’s incest. Sir Thomas inherited the family manor that, like many aristocratic estates of the era, is no longer profitable; the Sharpes are virtually penniless. The brother and sister began the „marriage and murder” scheme to support themselves and to fund Thomas’s inventions.

Back in the United States, the detective that Mr. Cushing had hired tells Alan what he uncovered about the Sharpes, including Thomas’s multiple marriages and Lucille’s time in a mental institution. Realizing Edith is in danger, Alan arrives at Allerdale Hall to rescue her. Lucille stabs him, then demands that Sir Thomas finish him off. Sir Thomas, who has fallen in love with Edith and does not want her harmed, inflicts a second, non-fatal stab wound to Alan before hiding him in the cellar. There, he promises Alan that he will protect Edith so that they may escape. Lucille, jealous over Sir Thomas falling in love with Edith, murders him in a rage. She then pursues Edith. Aided by Sir Thomas’ ghost, Edith kills Lucille. Sir Thomas bids Edith a silent farewell as his spirit departs. Edith escapes with Alan, and Lucille’s ghost is left to haunt Allerdale. 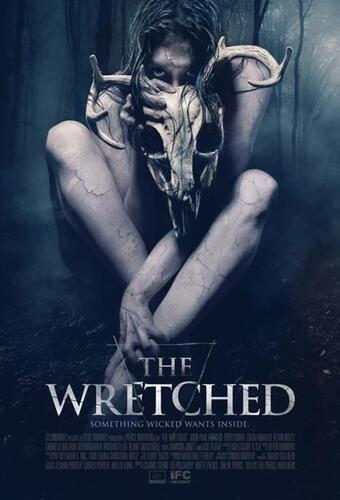