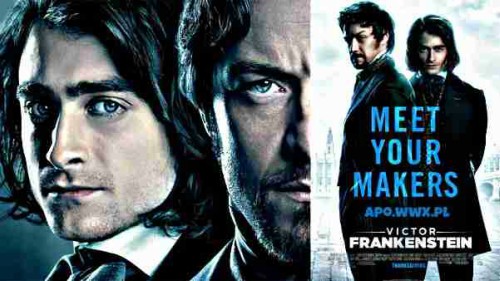 PLOT – In London, ambitious medical student Victor Frankenstein (James McAvoy) attends a circus performance, where he saves an injured aerialist, Lorelei (Jessica Brown Findlay), aided by a nameless hunchback (Daniel Radcliffe) enslaved by the circus' ringleader, and who harbors feelings for the girl. Impressed by the hunchback’s vast knowledge of human anatomy, acquired from stolen books, Victor rescues him, drains the cyst on his back that causes his physical abnormality and develops a harness to improve his posture, and then names him „Igor” after a recently deceased roommate. The two then become partners in Victor’s ongoing experiments to create life through artificial means, incurring the wrath of religious police inspector Roderick Turpin (Andrew Scott), who views their experiments as sinful.

After Igor suggests they use electricity to animate their creations, Victor procures parts from dead animals and creates a monstrous chimpanzee-esque creature nicknamed „Gordon”. Meanwhile, Igor reunites with Lorelei, now masquerading as the mistress of a closeted homosexual baron, and the two develop an affair, upsetting Victor, who views Lorelei as a distraction. Igor invites Lorelei to a demonstration on their experiment, which goes awry when Gordon escapes and wreaks havoc through the university before being killed by Victor and Igor. Lorelei is horrified by Victor’s experiments and urges Igor to dissuade him from pursuing the matter further, but Igor is reluctant to do so upon learning that Victor is driven by the need to atone for his indirect role in the death of his older brother, Henry, for which Victor’s domineering father, Mr. Frankenstein (Charles Dance), blames Victor.

Victor is expelled from college for his unorthodox methods, and later approached by his wealthy, arrogant classmate Finnegan (Freddie Fox), who wants him to create a humanoid artificial creature. Victor and Igor outline a behemoth being known as „Prometheus”, but Igor’s deepening relationship with Lorelei soon causes a rift between them. Shortly afterwards, Turpin and his men raid Victor’s laboratory, hellbent on destroying his inventions, and during an altercation with Victor, Turpin loses both a hand and one of his eyes, while Victor and Igor are extracted by Finnegan’s men and taken to his family’s estate in Scotland, where Finnegan provides them with the necessary funds to build Prometheus. Igor is mistrustful of Finnegan and leaves after having a falling out with Victor. Finnegan later kidnapps and binds him, revealing his plans to kill Victor once Prometheus is complete and weaponize his creation. Igor is then thrown into the River Thames to drown, but manages to escape and reunites with Lorelei, who nurses him back to health.

Once recovered, Igor returns to Finnegan’s estate with Lorelei in tow in order to rescue Victor, and finds Victor on the verge of using lightning to animate Prometheus. He ignores Igor’s pleas not to and activates the machine, just as Turpin unexpectedly arrives, the failed, illegal raid on Victor’s laboratory having cost his career, and opens fire on the machinery. Despite his intervention, Prometheus springs to life and rampages through the complex, killing Finnegan and Turpin. Victor realizes his efforts were misguided and joins forces with Igor to kill Prometheus by stabbing its two hearts. Igor sustains severe injures in the fight and collapses in Victor’s arms.

Igor soon recovers, having once again been nursed back to health by Lorelei. He then finds a letter written to him by Victor, in which Victor apologizes for all the suffering he caused and recognizes Igor was his „greatest creation”. Igor then reunites with Lorelei, while Victor retreats to the Scottish countryside in search of new discoveries.