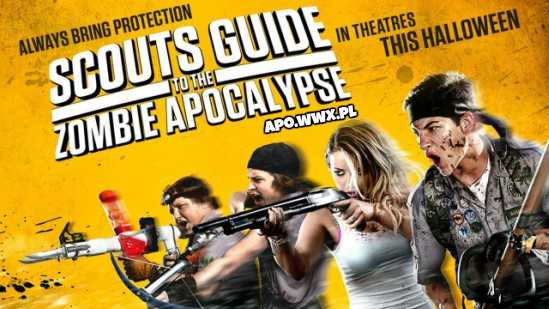 PLOT – Three high school sophomores, Ben (Tye Sheridan), Carter (Logan Miller), and Augie (Joey Morgan), are trying to recruit new members for their scout group, led by their Scout Leader Rogers (David Koechner). While Augie has always been happy about being a scout, Ben and Carter have second thoughts. Carter tries convincing Ben to quit but he can’t as Augie is about to get his Condor Patch. Their conversation of quitting is cut short when Ben accidentally hits a deer. They manage to get help from Carter’s sister, Kendall (Halston Sage), and her friends. Ben, who’s had a crush on Kendall, gets some advice from her and they all see that the dead deer has vanished. Before they leave, the two are invited to the „Secret Seniors Party” and Carter is given the address. When they go to get alcohol for the party, they meet Denise (Sarah Dumont), a cocktail waitress that works at a strip club. She and Ben hit it off and she agrees to buy the alcohol for them. The two then meet up with Augie in the woods so they can set up their campsite. That night, still concerned about the disappearance of Scout Leader Rogers, the trio talk about how great their friendship has been before heading to sleep. Before the night is out, Carter wakes Ben so they can attend the party. Augie catches up, however, and is disappointed by their choice. The two drive into town to find that the bouncer for the strip club is no longer there and they sneak in. The two are immediately attacked by a zombified bouncer and stripper before being saved by a shotgun wielding Denise. Augie goes to Scout Leader Rogers’ house to see if he’s OK, only to be attacked by him. He quickly subdues his zombie leader by setting him on fire and tying him up.

Ben, Carter, and Denise go to the police station to discover that the town has been evacuated, before they are chased by a zombie horde into a holding cell. They wait for hours when the zombies hear music from outside and leave. Augie, seeing Ben’s car, runs in and unlocks the cell, freeing them. They all escape and make their way down the freeway. After walking for a bit, the four are picked up by Corporal Reeves (Hiram A. Murray). They drive to the party to see if anyone is evacuated, only to find that the address that was sent to Carter was fake. The scouts start to have a fall out when a passed out Corporal comes back as a zombie. Denise kills him and they try to get a signal on his radio. They hear information about bombing the town and start panicking. Carter then remembers his sister’s diary has the party information in it. The four take the vehicle and drive to Carter’s house. Once there, they manage to get the diary as more zombies arrive. They manage to escape, using a trampoline, to get to the neighbor, Ms. Fielder (Cloris Leachman)’s, house. From there, they take her car and head off down the road. The four find a dirt bike down the road and Denise takes it so she can get the military. Now left by themselves, Ben, Carter, and Augie weapon up at a hardware store and head to the party.

Zombies swarm the building and partygoers are turned when the trio show up. They start killing zombies left and right while evacuating the building. Once they run out of ammo, they lock themselves in the building and the zombies follow them upstairs. Ben and Carter barricade the door when Augie reveals that he’s built a bomb that was hidden in Ben’s backpack. He manages to light the fuse when the zombies burst in and the three escape through a garbage chute just as it explodes killing all the zombies. Denise and the military arrive at the scene, setting up medical tents and helping the survivors while the scouts reconcile their friendship and Ben and Kendall kiss.